The project SPLICE IN was initiated by the two filmmakers Sandra Schäfer and Elfe Brandenburger. It consisted in the production of the film Passing the Rainbow as well as the organisation of a film festival that was first presented in Kassel, Berlin and Hamburg, and then continued in Kabul under the title SECOND TAKE. The online publication Documents offers access to content-related contributions, in-depth texts and video clips, going beyond the duration of the festival.

SPLICE IN is a term from film editing. It means inserting a new part in an existing sequence without deleting anything else, thus altering the dramaturgy. The project focuses on the possibility of intervening in existing conditions and on the methods applied to this end.

SPLICE IN intervenes in the representation of gender relations by presenting cinematographic and political practices in Afghanistan, in the neighbouring countries Iran and India as well as in Europe.

SPLICE IN does not concentrate on the biological category "woman" but analyses the conditions of gender relations - even if we use the term "woman" in the gender-binary social system of Afghanistan.

SPLICE IN creates correctives through cooperations.

The starting point of SPLICE IN was the shooting of the film Passing the Rainbow by Sandra Schäfer and Elfe Brandenburger. The film deals with strategies of undermining the rigid gender norms in Afghan society: on the level of cinematographic stagings, in political work and in everyday life. Passing the Rainbow was produced in close cooperation with actresses, directors and activists in Kabul. Sandra Schäfer and Elfe Brandenburger show excerpts of films from the history of Afghan cinema, accompany the actresses during filming and stage new scenes together with them. The close collaboration is conceived as a corrective to oversimplifying Western projections. It sheds light on the construction of representation, revealing interdependencies and contradictions between images, real living conditions and dreams and desires. 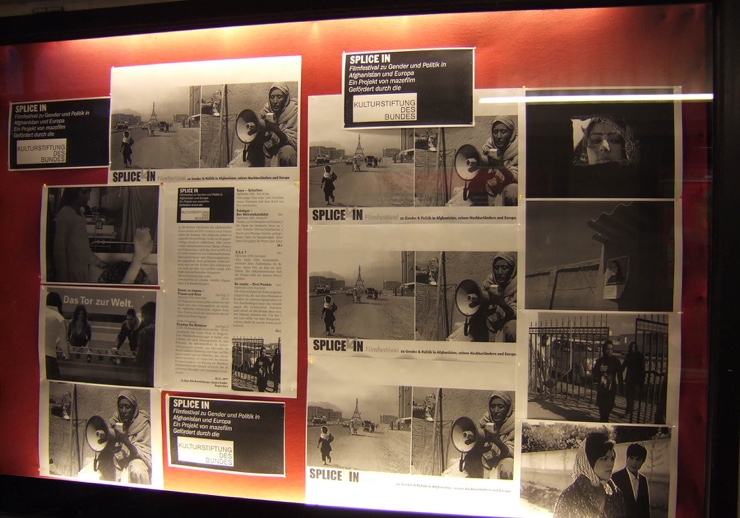 The work on the film led to the film festival SPLICE IN dedicated to gender and politics in Afghanistan, its neighbouring countries and Europe. As a film and discussion program, SPLICE IN intervenes in hegemonic discourses by inserting local as well as historical perspectives and narrative modes. A main emphasis lies on the specific political issues that the filmmakers choose and the way in which they represent them with the aim of intervening in local and international politics of representation. The situation of women in Afghanistan is repeatedly utilized as an argument for interventions and functionalisations by international and local politics. The SPLICE IN festival counters this practice with local initiatives of filmmakers, actresses and women's organizations, whose political work partially goes back to the time before the Taleban regime and was also performed in exile. When we use the term "woman" within the frame of SPLICE IN, we do not do so on the assumption of biologisms. We are instead interested in the way gender is constructed, how gender relations are socially produced in Afghanistan and which political methods are used to shift or traverse them. In this respect, SPLICE IN broadens the focus to include conflicts in the neighbouring countries Iran and India as well as in Europe.

As opposed to the Afghanistan events popular in the West, the film program SPLICE IN is neither a country-specific program nor does it seek to draw on the much-aliked "authentic" view from the inside, allegedly the only way to uncover the "truth" about the country on the Hindu Kush for a Western audience. In the end, this functionalisation for the sake of education by means of national identity is a case of positive racism.

The festival SPLICE IN is a collaboration with various local producers. It took place in November/December 2007 within the frame of the Kassel Documentary Film and Video Festival as well as in Berlin at Kino Arsenal and in Hamburg at Kino Metropolis. In April 2008, SPLICE IN was continued in Kabul for six days under the title SECOND TAKE in close cooperation with CACA-Kabul and Afghan-Film.

Film Festival on Gender and Politics in Afghanistan, the Neighbouring Countries and Europe. 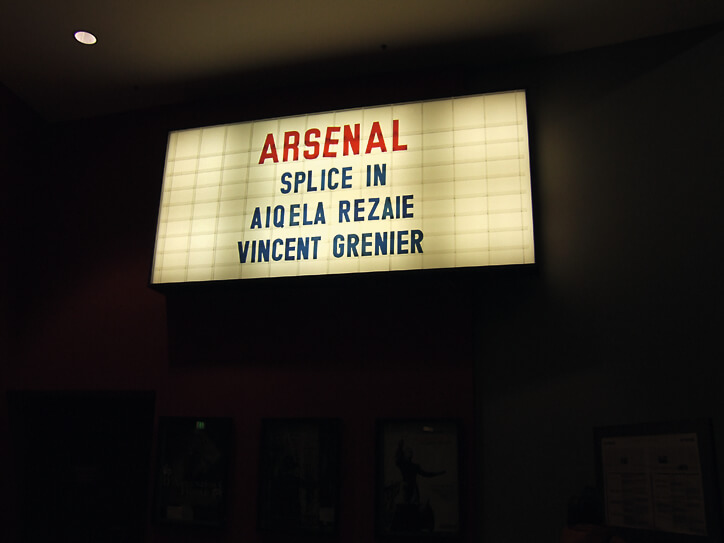 In the short history of Afghan cinema, women have been behind the camera for the first time only since 2001. Their cinematographic work is political in that it reflects and criticizes the present situation and is committed to the future status of women in Afghan society. The subjects of their films include the assumption of political offices, the abolition of forced marriages, criticism of traditional family structures, or efforts against corruption.

The SPLICE IN festival juxtaposed the theme of "women and Afghanistan", which had been repeatedly instrumentalized, with local initiatives of female filmmakers, actresses and women's organizations, whose political work partially went back to pre-Taliban times and has since then also been pursued in exile. These perspectives were brought together with films from the neighbouring states of Iran and India that address comparable political concerns. The Indian film Nari Adalat ("Women's Courts") by the filmmaker and feminist Deepa Dhanraj, for example documents an alternative legal form that emerged from an independent initiative and intervenes in existing hierarchical judicial structures.

The SPLICE IN film programme was previously shown in Germany in Kassel, Berlin and Hamburg, and was then newly compiled in collaboration with CACA-Kabul in Kabul under the title SECOND TAKE.

The festival was opened by Diana Saqeb's documentary 25 Darsad ("25 Percent") from 2007 on the everyday difficulties of female members of parliament in Afghanistan. The programme showed current documentary film productions, full-length features and educational feature films, e.g., the short feature Rushany ("Lightness") by the director Latif Ahmadi from 2004 that deals in a humorous way with teaching village women how to read and write. Also, two historical films from the archive of Afghan Films were screened. Furthermore, cinematic links to India, Iran, Europe, and the USA were made, through addressing topics such as gender and society within and across national borders. 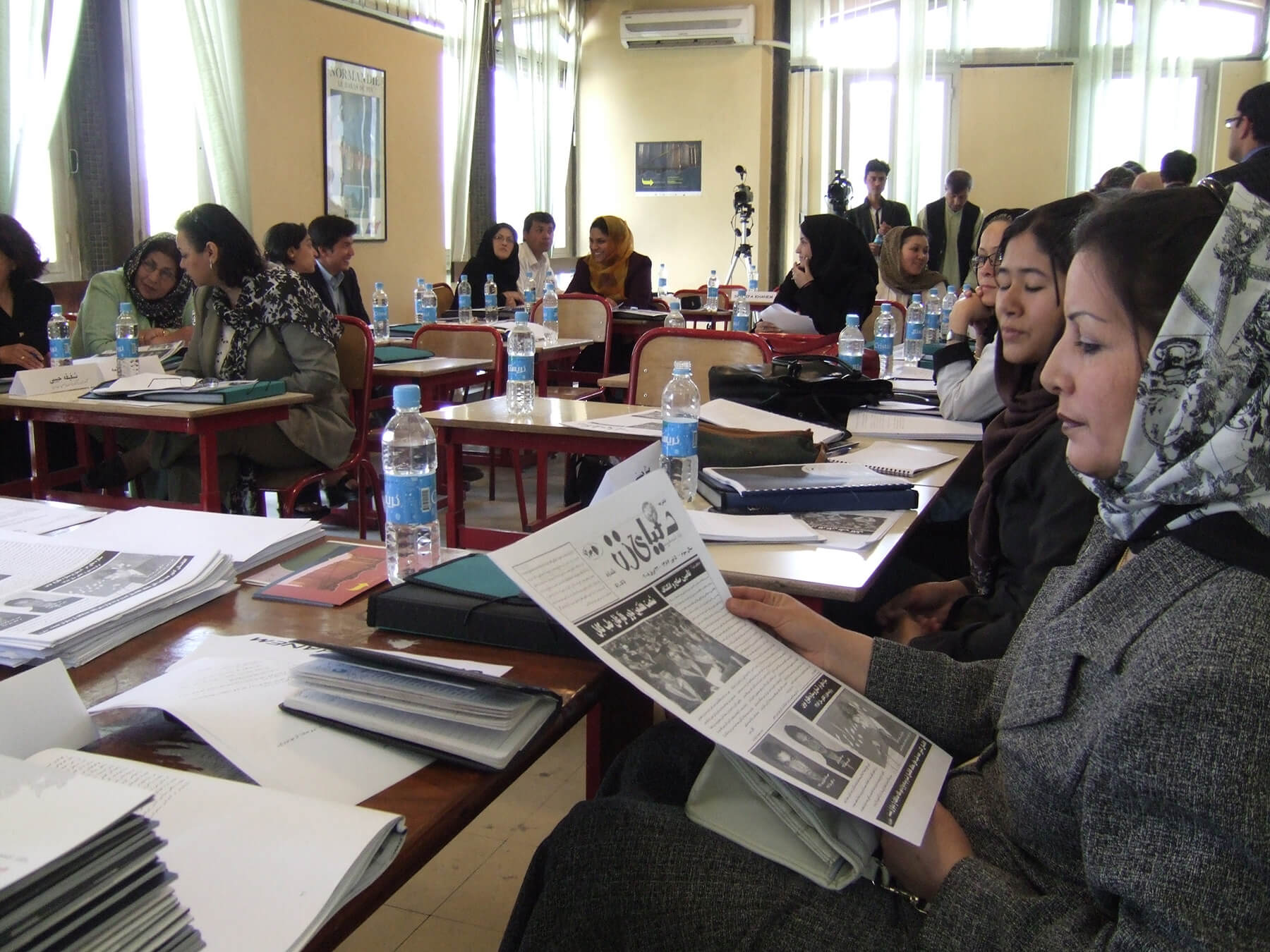 The seminar Strengthening Women's Movements: National and Transnational Experiences was part of the festival in Kabul in April 2008. It was organised in collaboration with the Armanshahr Foundation/OPEN ASIA and CACA-Kabul. Women activists, feminists and theorists from Afghanistan, India and Iran were invited to the seminar, in which women's rights activists, politicians, journalists, lawyers, and filmmakers exchanged political experiences and discussed options for action. In the morning, panels were held on civil society and the role of women's groups in Afghanistan situated between international relief funds, local NGOs and political activism, as well as on Muslim feminist work in India and current feminist activities in Iran. In the afternoon, the documentary Nari Adalat ("Women's Courts") by Deepa Dhanraj from Bangalore was screened. A concluding panel put up for debate the influence of international relief organisations on local NGOs and local women's rights activism in Afghanistan.

The bilingual online publication Documents (Dari/English) includes text contributions of the speakers, further texts by and interviews with specialists from Afghanistan, Iran and Germany, as well as video clips of selected talks which were held at the SECOND TAKE film festival in Kabul in spring 2008. As a documentation of the overall SPLICE IN project, it reflects on the individual projects, brings together different content-related threads and perspectives, and reveals the different responses to the festival. An article by the Afghan film critic Ali Mohammed Karimi, for example, is supplemented by a text of the Berlin-based film critic Bert Rebhandl. In addition to texts and videos on the theme of "Film and Gender", content-related emphasis is placed on "Gender and Activism". Here, light is shed on the conditions of gender-specific work between international relief funds and local political activism in Afghanistan. The filmmaker and women's rights activist Deepa Dhanraj analyses the appropriation of feminist concepts by religious fundamentalists and neoliberal economic reforms in India. The women's rights activist Sharifa Khanam, also from India, presents her long-time work in the network of Muslim women, Tamil Nadu, which focuses on giving legal advice to women and intervening in the hierarchical and misogynous system of the male Muslim Federation. In her contribution, New Feminist voices in Islam, the filmmaker and sociologist Ziba Mir-Hosseini is concerned with the political work of Muslim feminists, who must first free themselves from the two-fold accusation of being colonialist and antinationalistic.